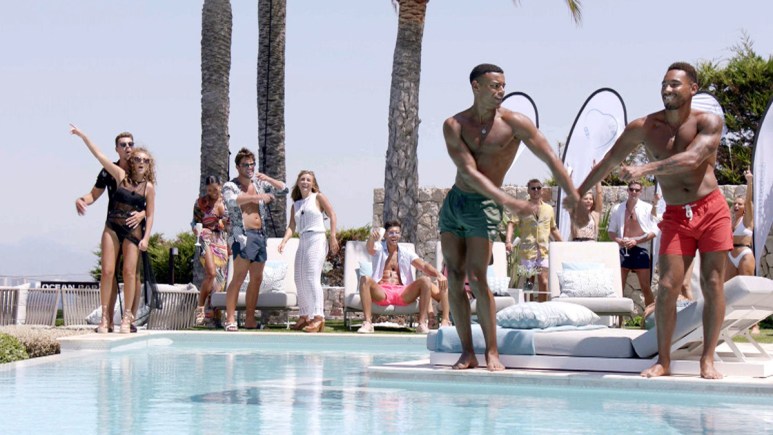 Love Island USA ended its third season on Sunday night, August 15, and revealed the couple that fans voted as the winners.

Now, there is a long wait for the fourth season and fans might be looking for something new to watch that resembles what they saw in the villa with the men and women looking for love.

The good news is there are plenty of shows out there like Love Island USA.

These include both newer shows and some that have been around for many years.

Most of these are available to stream on different services so you can binge-watch episodes from past seasons while waiting for new seasons to return.

If you loved Love Island USA and want to find something else to catch your attention, here is a look at similar shows with dating, betrayals, and pretty young people for your enjoyment.

The first alternative is an easy recommendation — the original U.K. version of Love Island, which has a ton of celeb fans and has proven superior to the U.S. version in many ways.

Debuting in 2015, the original Love Island is about to wrap up its seventh season just a week after Love Island USA finished its third.

The show has several celebrity fans, including Margot Robbie (The Suicide Squad), who invited the 2019 cast members to the Birds of Prey premiere party.

Robbie even got a Cameo from Hugo Hammond for her birthday in 2021.

Every season of Love Island is available to stream on Hulu.

Bachelor in Paradise is similar to Love Island USA, as it puts pretty people in an island resort and keeps the cameras on them as they try to find love.

The difference is that these are not unknown people who fans discover whether they like them or not during the season. This is a show where previous contestants from The Bachelor and The Bachelorette try to find love once again.

Fans of the Bachelor Nation franchise know these people but get a chance to see them here in a different atmosphere, not trying to compete for one person and instead, they try to find a compatible partner.

Season 7 of Bachelor in Paradise kicks off on August 16, 2021, and you can follow our coverage here on Monsters & Critics.

The first three seasons are available to stream on Hulu, while seasons 4-6 are streaming on HBO Max.

FBoy Island is a brand-new island dating series and this one has a twist.

Comedian Nikki Glaser hosts the show and she spends a lot of time roasting the guys, so if you love Matthew Hoffman on Love Island USA, you should love Glaser on FBoy Island.

This is also shorter than other dating shows, with only 10 episodes released over just three weeks.

FBoy Island is available to stream on HBO Max.

Too Hot to Handle

Too Hot to Handle threw a major twist into the reality TV show for the contestants.

This show had the young sexually active people looking for love go to the island thinking they were going to have a Love Island experience.

The twist was that they showed up and learned this was nothing like Love Island. Instead, the contestants were told they had to avoid all physical affection during the show’s four weeks.

They then had to go through challenges to help them bond without the use of sex. If they break that one rule, they won’t be winning the $100,000 prize.

Too Hot to Handle has two seasons, both streaming on Netflix.

For people who are more interested in the people playing the game, rather than those falling in love, Big Brother is the show for you.

If you haven’t heard of Big Brother, you have likely been living under a rock for the last 20 years. The show debuted in 1999 and has had 504 total seasons spread throughout 62 countries and regions.

The United States version is currently in its 23rd season, although there have also been two Celebrity Big Brother seasons on top of those.

No one is looking for love in this series, but people do form relationships in factions to dominate and make it to the end and the big cash prize.

All 23 seasons of Big Brother are available to stream on Paramount Plus.

For people looking for a show that features someone finding true love, look no further than that Bachelor franchise. While Bachelor in Paradise was already mentioned above, the ones that started it all are where the action really is.

In these two shows, a guy and a girl are looking for the perfect person to marry and they get a plethora of choices to meet, romance, date, and get to know, before finally narrowing it down to one lucky guy or girl at the end.

The Bachelor finished its 25th season in March 2021 and The Bachelorette‘s 18th season starts in October 2021.

Netflix has the sixth season of The Bachelorette.

It’s not every season, but it is a good place to get started.

Love is Blind was an interesting experiment, although it took away the fun of seeing people in swimsui8ts making out.

This Netflix series has the women and guys split up where they never see each other. The “dates” take place in pods, where they just talk and get to know each other, without knowing what they look like.

Finally, they decide who they are most compatible with through those dates and finally meet each other at a couples retreat. After they return, they move in together, meet their parents, and head into their wedding day.

It is here where they decide to get married or end things.

The first season of Love is Blind is streaming on Netflix.

Are You The One?

Are You The One was an MTV dating reality show that ran for eight seasons, with the last coming in 2019.

The idea here was that the producers decide on the perfect matches between men and women with a matchmaking algorithm (similar to Married at First Sight).

The group then lives together and it is up to the individuals to figure out who their “perfect match” really is (based on the ones chosen before the show started). The matched couples who find each other share the prize money.

The eighth season was groundbreaking as it included openly LGBTQ and sexually fluid contestants and was met with critical acclaim.

Temptation Island is similar to Love Island USA, in that it puts pretty people in an island villa and then has them face several challenges.

The big difference here is that the people coming in are couples from the outside world, and they are tempted by singles brought in to live with them.

The idea here is to see if the pre-existing relationships could survive the temptation brought in by the single competitors. This is like Casa Amor for an entire season.

There are six seasons of Temptation Island. Seasons 4 and 5 are available to stream on Peacock, but they are listed as Seasons 1 and 2 on the streaming site.