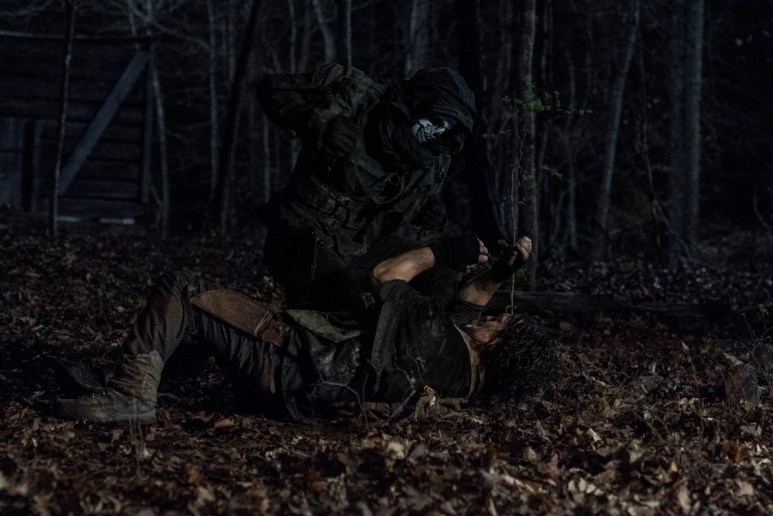 Season 10 of AMC’s The Walking Dead revealed a new threat by way of the Reapers. Now, the network has released its very first look at a character from this group called Pope.

When Maggie Rhee (Lauren Cohan) returned to The Walking Dead, she brought with her a new threat. The Reapers are known to be of a military background and are terrifyingly deadly.

While they will take out those they oppose ruthlessly, they will also opt for suicide rather than remain a captive, such as was proven in Episode 17 of The Walking Dead’s tenth season. However, this Reaper dropped an important clue before dying.

“Pope has marked you,” he said to Maggie.

Who is Pope in The Walking Dead?

As of yet, very little is known about this character in The Walking Dead.

The Reaper that followed and was captured by Maggie is believed to have been trailing her and the remnants of her community. Maggie revealed during the episode that Reapers had caused devastation previously to her group and had nearly entirely eradicated it.

Nothing else is known about the person called Pope, other than he has “marked” Maggie.

What this means is unclear but it gave the suggestion that Pope may be the leader of the Reapers.

Now, a new image gives fans their first look at this character, who will be portrayed by Ritchie Coster.

Shown standing on a set of stairs, Pope gives a steely look. He is wearing what appears to be darkly colored military-style clothing and a black beanie on his head.

According to the metadata included with this image, the scene attached to this image will appear in Episode 4 of The Walking Dead Season 11.

Daryl has a run-in with the Reapers

Another image revealed by AMC shows Daryl Dixon (Norman Reedus) apparently being attacked or captured by what appears to be a Reaper.

The character is wearing a distinctive mask that has been shown on other Reapers in a previous clip for Season 11 of The Walking Dead, proving he belongs to this group.

While the image was released as belonging only to Season 11, further metadata suggests that this image is also from a scene in Episode 4, giving viewers a hint as to when Daryl could have a run-in with the Reapers.