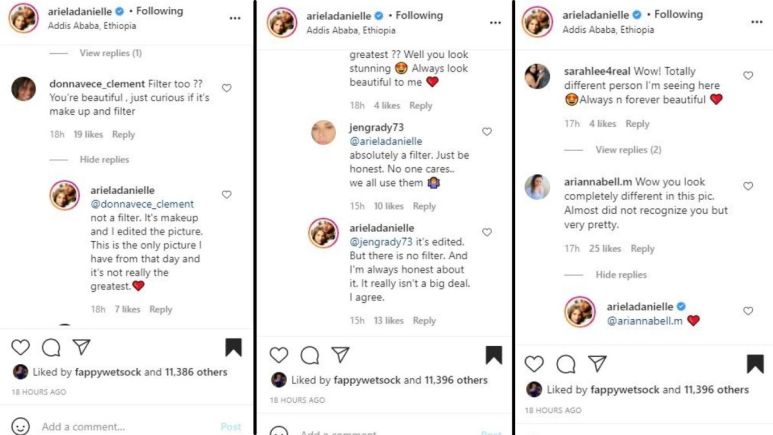 Ariela responded to followers who were commenting that one of her recent photos was over-edited. Pic credit: TLC

90 Day Fiance: The Other Way star Ariela Weinberg is open about the cosmetic procedures she has done and is apparently also open about her photo edits.

After she received a lot of pushback from followers about how much her recent Instagram photo seems to be edited she responded to a few people by detailing how she enhanced the photo.

Ariela received a lot of comments on her recent Instagram photo from fans and critics alike who were stunned by the drastic difference they saw in the photo versus the Ariela they see on their TV screens.

The photo that sparked all the attention was a portrait of Ariela where she is wearing a lot of makeup and her eyes and facial features look a lot smoother and defined than they do offline.

Usually Ariela does not alter her photos this much, so this was something new that fans apparently weren’t ready for.

Many of Ariela’s followers felt the need to comment and question her filter and editing usage on the photo, some from a critical perspective while others came from a more empowering place. Either way, Ariela answered some of them.

One person wrote, “Filter too ?? You’re beautiful , just curious if it’s make up and filter.”

Ariela responded, “not a filter. It’s makeup and I edited the picture. This is the only picture I have from that day and it’s not really the greatest (heart emoji).”

Someone else crudely replied to Ariela’s statement by saying, “absolutely a filter. Just be honest. No one cares.. we all use them.”

Ariela then defended herself and remarked, “it’s edited. But there is no filter. And I’m always honest about it. It really isn’t a big deal. I agree.”

Ariela also commented back to people saying she looks different in a good way. One fan exclaimed, “Wow you look completely different in this pic. Almost did not recognize you but very pretty.” Ariela wrote back with a heart emoji.

Biniyam will have a lot of grief on his hands this season when Ariela’s ex-husband comes to Ethiopia to visit her and possibly try and win her back.

Separately, baby Avi will need to have hernia surgery and Ariela will take him back to the United States without Biniyam to receive medical treatment there, worrying Biniyam, who has been left by an American woman with his child before.

Viewers will have to watch the upcoming season of The Other Way to find out all the other drama that will happen for the couple.