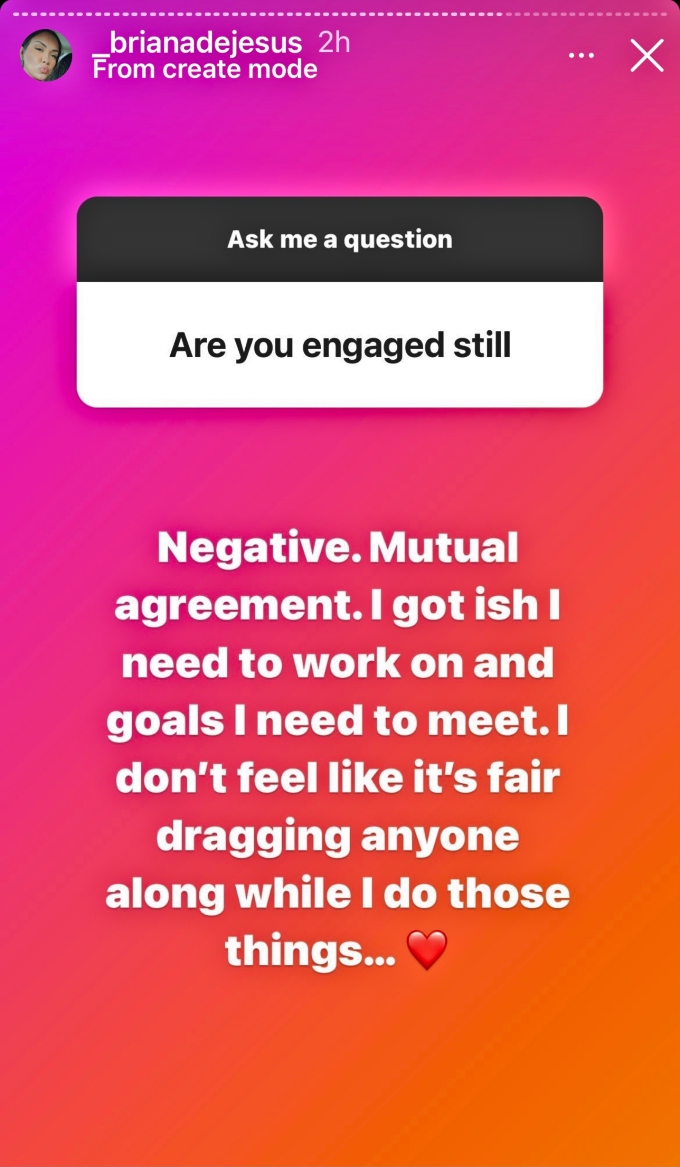 Teen Mom 2 star Briana DeJesus recently admitted to having commitment issues after revealing that her engagement to Javi Gonzalez has ended. Briana has been opening up to her followers on social media during the past two days and last night an Instagram Q and A revealed that Briana was single again despite her recent engagement

The mom-of-two shared that she and Javi were no longer together but confessed to still loving the tattoo artist. The announcement was surprising because we just saw Briana and Javi at the Teen Mom 2 reunion and the pair seemed ready to start their life together.

It’s not clear exactly why things ended between them but according to Briana, she simply wasn’t ready to be in a relationship. Her fear of commitment may have played a role in the breakup but Briana just revealed that things ended mutually between her and Javi.

Briana DeJesus is no longer engaged

The Teen Mom 2 star shared more details about her personal life in her Instagram story as she continued with the Q and A.

When one Instagram user asked Briana if she was still engaged, she responded, “negative” but her next statement indicated that things didn’t end on a bad note between her and Javi.

“Mutual agreement,” continued Briana. “I got ish I need to work on…I don’t feel it’s fair dragging anyone along while I do those things.”

Although Briana shared the news of her breakup yesterday it’s still not clear when the couple actually split. Rumors were running wild a few weeks ago that they had broken up –especially Briana she was spotted without her engagement ring.

However, she denied that there was anything wrong and claimed that her ring was being upgraded and that’s why she wasn’t wearing it.

Many people didn’t buy the explanation but Briana and Javi seemed just fine during their appearance at the reunion, so something drastic must have happened since then.

As for Javi, he hasn’t posted anything about his broken engagement to the MTV star on social media and since he doesn’t like the limelight, Javi will most likely keep things private.

Briana DeJesus admits to being scared of commitment

Briana responded to another fan question on Instagram after one user asked if she was scared of commitment.

“Yes I am,” responded the Teen Mom 2 cast member, “But not to the point where I don’t ever wanna commit.”

Briana went on to say that the engagement ended because it’s simply not her time yet. So maybe in the future, the MTV star walk down the aisle, just not now.

Are you surprised that Briana and Javi broke up or did you see it coming?