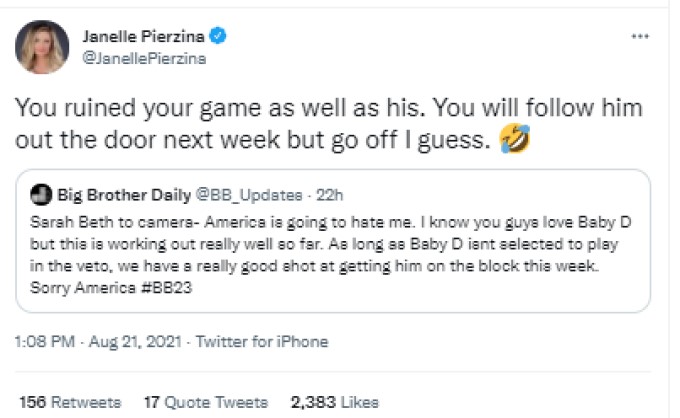 Janelle Pierzina is not a fan of Big Brother 23 houseguest Sarah Beth Steagalls’ moves this week. Janelle even says that the plan Sarah Beth now has in place has “ruined” her game to the point of her going “out the door next week.”

On the Big Brother live feeds, fans watched as Kyland Young kept Sarah Beth up all night after the last eviction episode. He worked on her until Sarah Beth had moved entirely away from her own plans and was ready to put the people on the block that Kyland wanted.

Sarah Beth also spoke to the cameras on Friday (August 20), apologizing to America for taking out Derek Xiao, who she thought America loved due to the amount of BB Bucks he was getting each week. It looks like America gave him 100 BB Bucks again this week, but we will have to wait for the August 22 episode to find out for sure.

“America is going to hate me. I know you guys love Baby D but this is working out really well so far. As long as Baby D isnt selected to play in the veto, we have a really good shot at getting him on the block this week. Sorry America[sic],” Sarah Beth said according to live feed blogging site, Big Brother Daily.

“You ruined your game as well as his. You will follow him out the door next week but go off I guess,” Janelle wrote in a response to the words from Sarah Beth.

It’s worth noting that Janelle has also been rooting for Derek Xiao, so it’s understandable that she is getting frustrated about a plan to send him to the BB23 jury house.

The High Roller’s Room opened up again on Friday, with houseguests getting a shot to play the other casino games in order to release powers upon the Big Brother house. It looks like two people spent the 125 BB Bucks to play the roulette game. Here are those game results from the BB23 cast.

Taking a step back from there, Sarah Beth nominated Derek Frazier and Claire Rehfuss for eviction this week. That was what Kyland convinced her to do, with Derek F becoming a pawn again for a new HOH. From there, the plan is to make sure that Derek Xiao is backdoored and that he joins Britini D’Angelo on the BB23 jury very soon.