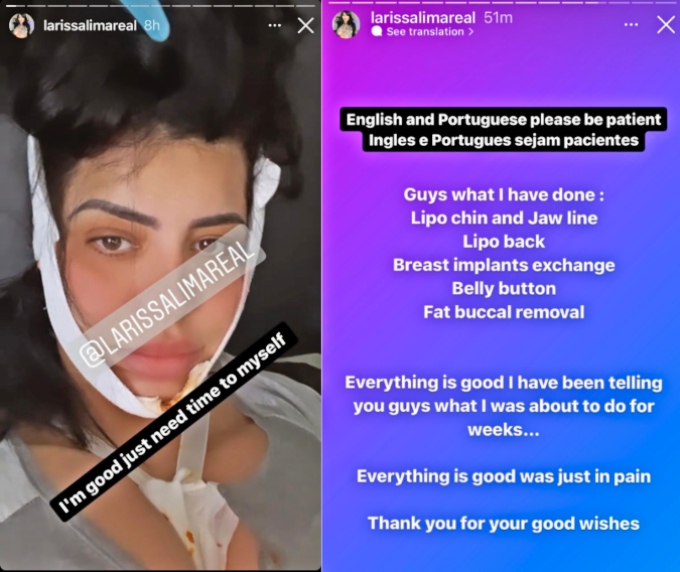 90 Day Fiance: Happily Ever After? star Larissa Lima is currently healing after another round of plastic surgery procedures. The Brazilian beauty has undergone a physical transformation over the past few years and these days she looks vastly different than the person we first met on the show.

One difference is Larissa’s breasts which have gone through a few enhancements and are now noticeably larger. However, she’s still not at the desired size and recently went under the knife once again to make them bigger and Larissa made a few other alterations to her body as well.

The 90 Day Fiance: Happily Ever After? star has been teasing the big reveal on social media.

Larissa shared an update on Instagram after her latest round of surgeries and revealed that she’s going through the healing process right now. She also shared a photo of her face wrapped in bandages along with a note listing some of the procedures that she had done.

Larissa had liposuction on her chin and jawline as well as her back. She also had work done on her belly button and switched out her breast implants for a bigger pair.

While the 90 Day Fiance: Happily Ever After? star is still healing right now, she does have plans for a grand reveal, but it won’t be on social media.

Larissa recently shared another update on Instagram and noted, “Everything with the plastic surgery performed by Dr. Smith is going amazingly well.”

“Next week, I will have my personal sneak peek of the progress. I am so excited,” said Larissa who also informed her social media followers that the results of her plastic surgery will be revealed on the paid adult platform, OnlyFans.

“There will not be any before and after pic or videos posted here. The results will first be shown on OF,” shared Larissa.

During her post, the 34-year-old also teased something extraordinary.

“It is not a secret that I am a fan of plastic surgery, so never expect the ordinary to come from me,” she said.

Will you be heading over to OnlyFans to check out Larissa’s big reveal?