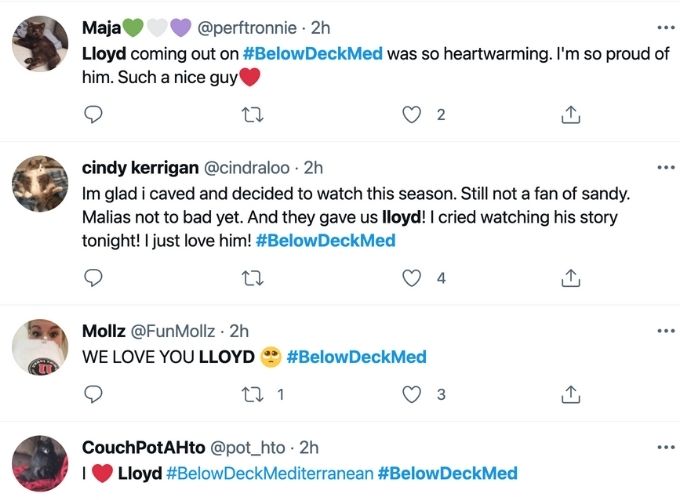 Below Deck Mediterranean star Lloyd Spencer calls opening up about his sexuality liberating, and fans are showering him with love.

Viewers watched as Lloyd broke down in tears on the most recent episode of Below Deck Med over being bullied because of his sexuality. Malia White, Katie Flood, and David Pascoe rallied around Lloyd as he described the terrible treatment he endured in previous jobs.

Lloyd has spoken out regarding what it was like to reveal he identifies as sexually fluid on television and how he felt watching the episode play out.

In a recent interview with E! News, Lloyd admitted talking so honestly about his sexuality and bullying was not planned. Lloyd had no intention of discussing it on the show. However, a moment of pure security and comfort with the crew gave him the courage to open up.

The deckhand also spoke about being sexually fluid and what that means to him.

“I completely believe in like a fluid spectrum, and as any part of my life, I might move on that spectrum up or down,” he shared with the website. “It just depends on the time in my life. It depends on where I am. I personally feel like everyone is on that spectrum. People may be a bit more than others, and I certainly have my experiences where I’ve been up and down on that.”

Lloyd spilled that seeing the episode was “liberating” for him. It was also the episode Lloyd was most worried about watching. Yes, even over his injury episode that occurs later in the season.

“t’s certainly relieving. I’m relieved that I watched it. It was nail-biting for me to watch the episode, but I have had nothing but support from just the colleagues on the boat but also from people on social media as well,” Lloyd stated to E! News.

Speaking of all the support Lloyd has received, social media has been a lovefest for the Nicolas Cage look alike.

Below Deck Med viewers flocked to Twitter to express adoration for Lloyd and his honesty.

Lloyd’s openness about his sexuality moved viewers to tears, while others were heartbroken over him being bullied.

From the moment Below Deck Mediterranean Season 6 premiered, fans have adored Lloyd Spencer for his positive vibes. Lloyd’s honesty over his sexuality and ability to open up about it on a reality TV show has fans showering him with love.