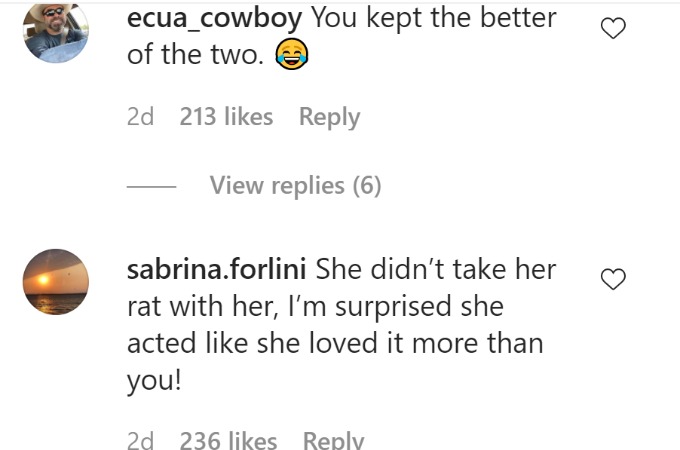 Mike and Natalie’s break-up left 90 Day Fiance: Happily Ever After? viewers wondering what happened to Lucky, the pet rat.

The former couple brought home the rat from a pet store after Natalie demanded that they rescue the animal from being fed to a snake.

Lucky was prominently featured in scenes with the former couple, and the pet rat even made an appearance on Pillow Talk.

In a dramatic scene, Natalie tells Mike that she is moving out of his home.

After expressing her unhappiness in the marriage, Natalie added, “I cannot be here.”

The Seattle resident responded, “So, you’ve taken it upon yourself to move to Juliana’s.”

Natalie declared, “I don’t have anyone here.”

Mike fired back and told her, “Apparently not even me, huh?”

In the bizarre scene, Natalie began talking to the pet rat prompting a frustrated Mike to say, “Whatever. Get your s**t, I don’t care,” before walking away from the dinner table.

Natalie then packed her bag and put Lucky back in its cage as she made her way out of the home.

Mike gave 90 Day fiance: Happily Ever After? viewers an update on the rat after many fans were surprised that Natalie abandoned the pet rat.

It appears that the TLC star has grown a liking to Lucky.

“Look who it is the best rat in the world,” Mike wrote in the caption of the Instagram video.

“For all you still wondering if the rat is still alive and crawling, she is kicking.” Mike enthusiastically declares before affectionately cuddling the pet.

In the comment section of the Instagram video, Mike’s fans took the opportunity to take a dig at Natalie for leaving the rat behind.

One commenter said, “She didn’t take her rat with her; I’m surprised she acted like she loved it more than you!”

Another commenter added: “You kept the better of the two. [Crying laughing emoji].”

Mike Youngquist revealed that he is spending the summer with Uncle Beau. The TLC star released a video on his Instagram page showing himself and Uncle Beau enjoying a swim at a pond.

Uncle Beau previously accused Natalie of ruining his life and accused her of running over the pet dog Nymeria.

In the Tell-All, Natalie accused Uncle Beau of stealing her jewelry. However, Beau did not make an appearance in Part 1 of the Tell-All event.