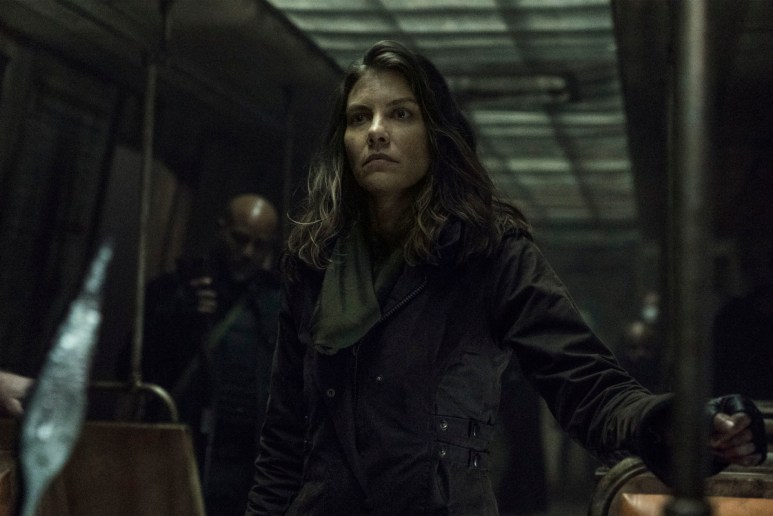 With less than two weeks to go until Season 11 of AMC’s The Walking Dead premieres, the network has released another teaser clip thanks to their 11 weeks of reveals schedule.

Already, it is known that Maggie Rhee (Lauren Cohan) will lead a small group into a tunnel when they get stuck in a storm while out on a supply run.

What viewers learn from this clip, though, is that the tunnel might be much more dangerous than the storm they left behind.

Alexandria is in trouble

The reason Maggie’s group is on a supply run is that the community of Alexandria was severely damaged during the Whisperer War that occurred in Season 10 of The Walking Dead. Not only is there plenty of damage to the buildings and the walls that surround them, but their food supply has also been decimated.

According to the synopses for Episodes 1 and 2 of Season 11, Maggie believes she knows where they might find supplies, and the group sets out to find them.

This is believed to be a dangerous mission, although very little has been said about why this mission is so dangerous. However, Forbes did reveal the reason for the danger and, for those who don’t mind light spoilers, it has something to do with the group called the Reapers that followed Maggie to Alexandria.

While searching, a storm hits in Episode 1, and the group is forced underground into a subway tunnel, where further dangers lurk.

Negan sees a problem in the tunnel

Already, it is known that the group will encounter a mass grave, a strange noise that sounds suspiciously like an animal, Maggie’s potential death, and some particularly sinister graffiti. The latest video reveals yet another danger.

The clip for the Season 11 premiere episode of The Walking Dead opens with the group making their way through the subway tunnel. Noises are heard, but Alden (Callan McAuliffe) believes they are being caused by the air being pushed through the pipes and that it is nothing to be worried about.

The group moves on, but Negan (Jeffrey Dean Morgan) points out that there is a water line running the length of the tunnel.

Considering that a storm rages above them, this is alarming news indeed. Although, Maggie and Daryl (Norman Reedus) don’t seem to think so, being so always opposed to anything that Negan says.

Because of this, they head on their way, and viewers are left wondering just how long it will be before the tunnels flood.

Unfortunately, though, it seems likely that fans will have to wait until the episode airs to find out more.