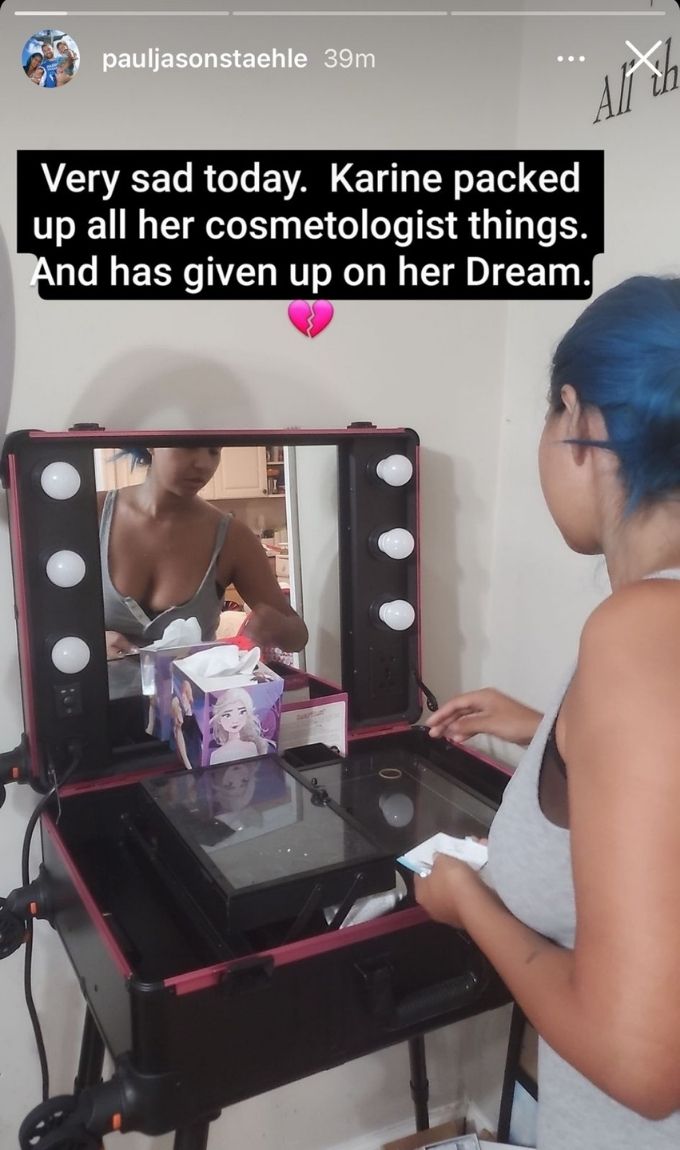 After having a few months of calm from 90 Day Fiance’s Paul and Karine, it looks like the pair are back to their messy and public ways.

Paul began a wild Instagram story drop by showing a picture of Karine in front of her makeup stand with the caption, “Very sad today. Karine packed up all her cosmetologist things. And has given up on her dream.”

This first part to his Instagram story could have been a dig at Karine because he went on to post even more shocking content which onlookers could assume was about a possible breakup.

He posted details of the results of an STD test, something cryptic about having the cops called him, and a shoutout to his mom for taking care of their kids during these hectic times.

Did Paul and Karine breakup again? Was infidelity the reason behind the STD evidence, or is Paul trying to inflate things to stay relevant?

Get our 90 Day Fiance newsletter!

Paul began his Instagram story rant with the picture of Karine packing up her cosmetology things.

It remains unclear what Paul’s purpose was for letting the public know Karine was giving up on her dream. He could have been trying to add insult to injury if they did break up by putting her on blast and putting her dreams down. The subsequent reveleations could point to that being the case.

What came next was a series of bizarre negative STD tests and a cryptic story post about accusations against him.

Paul said, “I did not deserve the police called on me. I am tired of false allegations and accusations. I do. everything I can to make people happy. Even recent travel. Teaching how to drive. Getting all brazillian documents translated and certified to go to an American College. Pushing to make friends. But I am always the bad guy.”

One popular 90 Day Fiance fan page, @this_mommy_says_bad_words, shared Paul’s story stream in a post on Instagram and gave their thoughts on what’s going on. they said, “More trouble in Paul and Karine paradise…Paul shows negative STD tests, which can only mean that some of Karine’s came back positive…”

Paul and Karine’s public and strange fighting is deeply troubling because they have two young sons to consider.

They have been staying in Kentucky for the last few months since coming back to America from Brazil and this has been their first sign of trouble since being back.

90 Day Fiance is currently on hiatus.