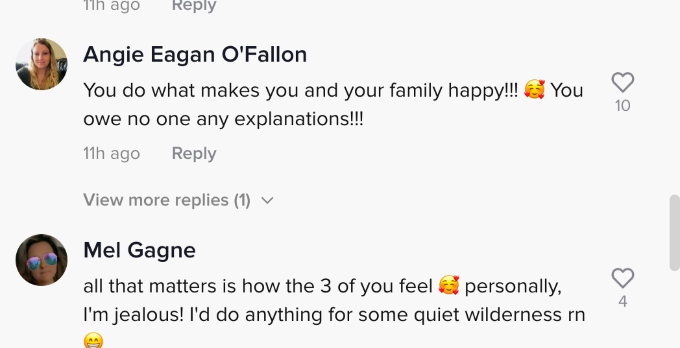 Raiven Adams from the Alaskan Bush People took to her TikTok this weekend to share an update regarding her relationship with Bear Brown. The two Discovery Channel stars called it quits back in April for the third time, but it looks like they are back on track.

River’s mother shared a cute video out in the woods of the Wolf Pack’s homestead that featured her one-year-old son and Bear. She wrote, “Just live the best life we can not everything is meant for you to understand.”

In the background, Bear could be seen throwing River up into the air and catching him amongst the trees while Raiven addressed the camera. She performed a shrug-off motion as she turned and walked towards her future.

Raiven and Bear are back on

Raiven then took Bear’s hand as the couple walked into the forest to play with their child. She shared in the comments that Bear’s “mom and da actually love me, and they have always felt that we were meant for each other.”

Alaskan Bush People fans immediately showed their support and loyalty with one writing, “You do what makes you and your family happy. You owe no one any explanations.”

Another viewer typed, “All that matters is how the 3 of you feel. Personally, I’m jealous! I’d do anything for some quiet wilderness.”

The two reconciling didn’t come as a surprise to Alaskan Bush People fans. Only last week, Raiven seemed to confirm that she and Bear had gotten back together in the comments of another TikTok video.

She shared with a fan, “We aren’t apart, just not sharing our private life as much anymore.” Raiven revealed that the two had been co-parenting well even after a few bumps in the road.

Since the couple’s last break up, Raiven had been keeping a low profile while Bear continued to post on social media. Even though neither Alaskan Bush People star went into detail regarding their reconciliation, it seems that most of their fans support their decision.

It is safe to say that the duo will keep fans abreast of their situation since both seem to enjoy the limelight that comes from starring on the family show. For now, Raiven and Bear are looking to improve their relationship for the sake of their son.

The Alaskan Bush People is currently on hiatus.