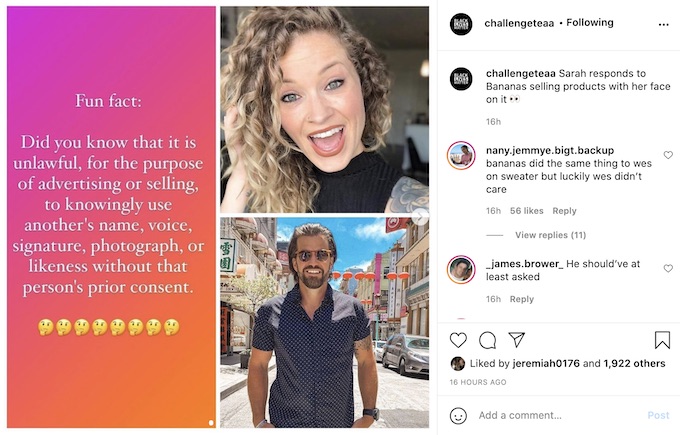 Former The Challenge winner Sarah Rice has recently put her former castmate Johnny Bananas on notice after his continued profiting from their infamous Rivals III moment.

As many viewers saw in that historic reality TV finale, Bananas and Sarah won the final together. However, Johnny had the better time or score, which allowed him to split the grand prize money or keep it all to himself.

He chose the latter, creating one of the most shocking and epic moments in reality television. While that happened years ago, Sarah has taken notice that he’s still profiting from it, without her permission.

On the fifth anniversary, Bananas seemed to be in celebratory mode. He shared several Instagram posts to promote the photo he’s selling of him and Sarah’s faces on it from the Rivals III moment.

The photo, called “Take The Money and Run” on Johnny’s website, is shown below with Bananas’ autograph over himself, next to Sarah’s reaction just as she’s being left penniless.

At the time of the anniversary, Sarah posted a TikTok video about that Rivals III moment, indicating it’s not something she worries about. However, that appears to have changed with her becoming aware of the item Bananas is selling.

Sarah calls out Bananas for selling item with her face

In the past several days, Sarah posted an Instagram Story to call out what Bananas is doing. Basically, she let him and others know about the legality of using someone else’s face or likeness without their permission for profit.

“Fun fact: Did you know that it is unlawful for the purpose of advertising or selling to knowingly use another’s name, voice, signature, photograph, or likeness without that person’s prior consent,” Sarah posted on an IG Story slide.

She posted another IG Story slide that features her and another former Challenge star, Susie Meister, lying on the grass. The two have remained close friends, and Susie is now a podcast co-host alongside Sarah for The Brain Candy Podcast.

The account @challengeteaa shared that photo, which includes the message, “…and we’re in the mood to take some money and run.”

The infamous moment which saw Bananas make that jaw-dropping decision aired back in 2016 on MTV. That was Sarah’s last appearance on The Challenge, while Bananas has appeared on seven more seasons since.

His most recent appearance was Total Madness in 2020, where he won the final, giving him a seventh Challenge championship. He has banked over $1 million in prize money during his career on the competition series and is now banking money from hosting gigs along with the merch.

Sarah has shared why she hasn’t returned to The Challenge since Rivals III. Meanwhile, Johnny has recently started a new podcast where he’ll be covering Season 37 of the show. He told guest Bill Simmons he’s not quite done competing on the MTV show yet, suggesting he’s taking a bit of a break.

As of this report, the Take The Money and Run photo is still available for sale on Bananas’ website, RealJohnnyBananas.com. It’s currently selling for $15 plus shipping, along with other autographed photos featuring Bananas by himself.

It should be interesting to see if that particular photo stays there or is eventually removed after Sarah’s comments.