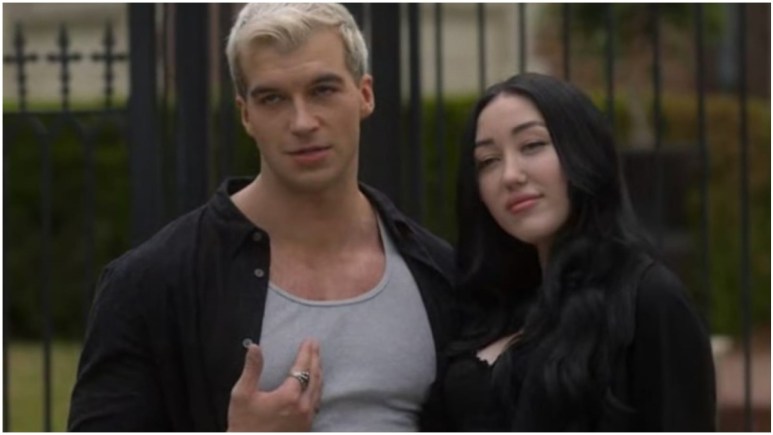 American Horror Stories gets meta with its Season 1 finale. Let’s take a look at what went down in Episode 7, titled “Game over.”

A couple obsessed with American Horror Story turn up for a sleepover at the Murder House. Right off the bat, they are name-dropping the original FX TV series and, to be honest, it’s awkward.

Even with a warning, they want to stay the night and drop a bunch of backstory about how they met and how much they love all things horror.

They are totally convinced that the escape room-styled Airbnb the Murder House has become is put on — even when Connie (Noah Cyrus) is already seeing the Rubber Man when she is trying to vibe and feel the energy of the house.

Also, just a shout out for the new couple characters being named after the actors that played the original couple in AHS: Murder House.

Afterward, things start happening right away. A strange noise, a red ball being rolled into the room. But, it’s totally someone in the house fabricating it all, yeah?

Well, the audience knows better. However, for now, Connie and Dylan are oblivious and go hunting the humans pretending to be ghosts. Except that Connie seems stuck to the bed for a moment there, which is weird.

Connie and Dylan immediately run into the body of a nurse and start popping off about how much they know about the history of the house (just in case viewers are only just tuning in and haven’t already watched everything related to AHS).

Although, at least they don’t like AHS: Roanoke either. It’s literally the only thing I like about this couple.

Down into the basement, they go

While this episode may be all about rehashing the AHS universe, there is still a surprise in the basement.

Three girls are locked in a metal-barred room. Even Connie and Dylan are surprised and assume they missed an episode somewhere along the way.

But, this is where we finally get some apparently new Murder House lore.

According to the girls, they were turned on by Dr. Ben Harmon (Dylan McDermott) ten years earlier on Halloween. Not heeding his warning and leaving, they ended up being murdered in the house.

So, of course, they can never leave.

Immediately, Dylan thinks that this is the objective of the Murder House escape room experience. However, s**t immediately gets real and he gets cut up pretty badly.

And, considering how much Connie claims to like horror, she immediately starts sooking and asking the people behind the scenes to knock it off.

Except, there’s no one there but the ghosts.

It doesn’t take long for Dylan to become a permanent resident of the house but Connie makes a run for it rather than being killed by Addie Langdon (Jamie Brewer).

Joining Addy is the clown from Freak Show, which makes no sense because he was never featured in AHS: Murder House. Plus, Addie never died in the house, so shouldn’t be there either…

Is this a game?

Then, Connie starts glitching, and all those times that she weirdly got stuck to the spot earlier in the episode start to make sense. Is the Season 1 finale of American Horror Stories a VR game? The title certainly suggests it.

And, that’s when viewers discover that it is actually a game created by Michelle (Mercedes Mason). Her son, Rory (Nicolas Bechtel) is giving it a run-though and critiquing it.

And, he’s not happy.

Glitches aside, he thinks the storyline and inclusion of ghosts in the Murder House that shouldn’t be there totally sucks. And he’s not wrong, the opening credits for Episode 7 are better than what Michelle designed.

Which is a shame because Michelle is that mom who develops a video game to bond with her son rather than just sitting down and actually watching his fave show with him.

Michelle responds by actually buying the Murder House. Or as the agent refers to it, the “Devil Baby House.”

Michelle moves in on Halloween, so she totally passes all the ghosts leaving because, as was established in Episode 2 of American Horror Stories, the ghosts can only leave on this particular night every year.

Still-alive Scarlett (Sienna McCormick) and her ghostly girlfriend, Ruby (Kaia Gerber), are the only ones to stay and Michelle quickly goes searching for them to move them on out of what she thinks is her house.

She can’t find them but she does come across Ben Harmon and the pair psychoanalyze each other as Michelle starts to realize the ghosts attached to this house are actually real.

Also, she didn’t actually buy the house, she just pretended she had the cash to do it so she could spend a few days there until the deal doesn’t go through.

An interesting conversation is had about how maybe if the ghosts come to terms with their Earthly hang-ups, they might actually be able to move on from the house.

Except, Ben leaves before anything can really be organized and Michelle is left wondering if maybe she should just make a video game about True Blood instead.

Meanwhile, Scarlett and Ruby try to convince Michelle that maybe some of the ghosts really want to stay here.

Then, they kill Michelle.

Fast forward to another next Halloween and Michelle meets up with her son who is totally p*ssed that she is dead now.

Burn it with fire

Rory has a plan, though. He thinks everything can be fixed simply by burning the Murder House to the ground. Fire purifies everything, right?

Rory turns up the day after Halloween and starts pouring gasoline over the house. This p*sses off Ruby, who totally doesn’t want to be purified because her thing with Scarlett is still super hot and heavy.

The battle then begins between the ghosts who want to stay and those that want to go.

Even though Ben and the Mean Girls pretty much kill Ruby, she still manages to get a message to Scarlett that she needs help and her girlfriend immediately rushes over.

Scarlett turns up just as Rory is trying to light a match (couldn’t that boy bring a Zippo or something?) and the struggle continues until he finally torches the place.

Ruby wants Scarlett to die in the house with her but, surprisingly, Scarlett decides to walk away instead.

Scarlett turns up to check out one of the new condos that have been built on what she refers to as the “hallowed ground” of where the Murder House once stood.

Once she pays one million in cash, the condo is hers.

And, as expected, she’s there for Ruby. who doesn’t turn up at first but then does, complete in the Rubber (Wo)Man costume. It turns out all the other ghosts are gone but she opted to stay.

That’s right, this was also a video game!

It’s Michelle’s 2.0 version and Rory is totally impressed with this one at least as the Season 1 finale of American Horror Story concludes.

American Horror Stories is currently airing on Hulu. Season 2 of the new series has been confirmed by FX but no premiere date has been released yet.