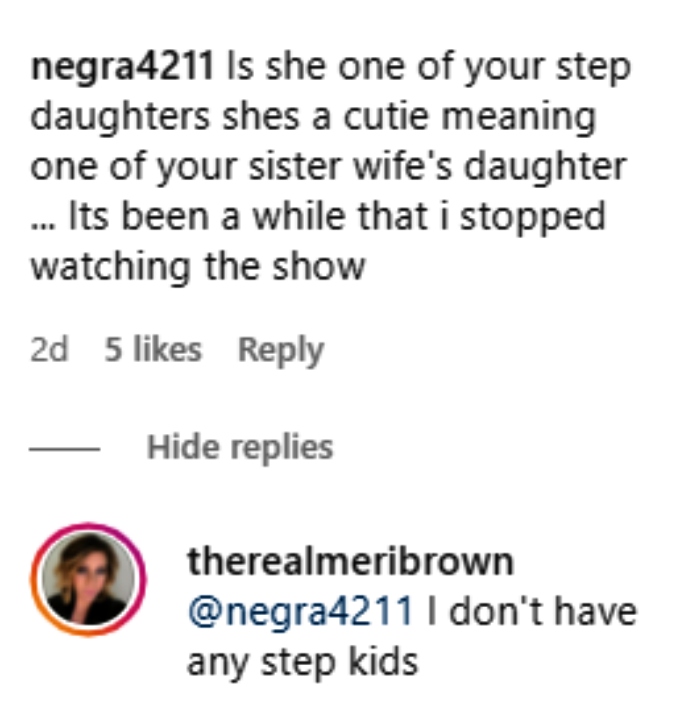 Meri Brown’s estranged husband Kody Brown has a total of 18 kids with his four wives, and the Sister Wives star implied that she views them all as her own.

Meri and Kody share one biological child together, daughter Mariah, 26, and have been married for 31 years.

The estranged couple was married legally for 24 years before they divorced to allow Kody to adopt his fourth wife Robyn Brown’s three children from a previous marriage, in 2014.

Since then, Kody and Robyn have welcomed two more children into the Brown family: son Solomon, 9, and daughter Ariella, 5.

Meri gushed about her close relationship with the youngest of the Browns’ children on her Instagram page on August 18.

Meri shared a selfie with Ariella, as she put her arm around Kody and Robyn’s daughter and they brought their heads together to smile big for the camera in the sweet pic.

“This kid. This sweet soul who brings sunshine wherever she goes. This sweet girl who wants to give, and serve, and protect,” Meri gushed about Ariella.

“She gets excited to see me, she wants to feed me and give me gifts, and gives the best little girl hugs. She loves wearing long princess dresses that drag behind her (queue all the #LuLaRoeCarly extra extra smalls lol) and will dress up with all the princess crowns.”

Meri concluded her caption, “She’s a spitfire little angel. She’s pure perfection. I consider myself lucky to have her in my life.”

In the comments section, one of Meri’s followers was curious about Ariella’s identity and asked Meri, “Is she one of your step daughters[?] shes a cutie meaning one of your sister wife’s daughter … Its been a while that i stopped watching the show[.]”

Meri Brown seemingly considers all of Kody’s kids her own

Meri seemed to make it quite clear that she doesn’t view Kody’s kids with his other wives any differently than she views her own biological daughter.

When another one of Meri’s followers mistook Ariella for her grandchild, Meri not only corrected them, but also referred to Ariella as “one of our kids.”

The follower’s comment read, “Very sweet, little girl. Grandkids are just the best! I sure love mine[.]”

Meri’s response was, “@mcclellanlinda They are, but this isn’t my grandchild. This is one of our kids, Robyn’s youngest.”

This isn’t the first time Meri has gushed over Ariella. In March, Meri shared a similar post, saying of Kody’s youngest child, “This girl…. she lights up my life!”

Ariella’s big brother, and Kody and Robyn’s son, Solomon, also holds a special place in Meri’s heart. In July, Meri gushed over her “special bond” with Solomon in a similar post on Instagram, but Sister Wives fans think she was just looking for “validation.”

Meri and Kody have been estranged for quite some time now and practically live separate lives. Kody is rumored to be spending most of his time with Robyn and their kids, while Meri splits her time between Flagstaff and her bed and breakfast in Utah.