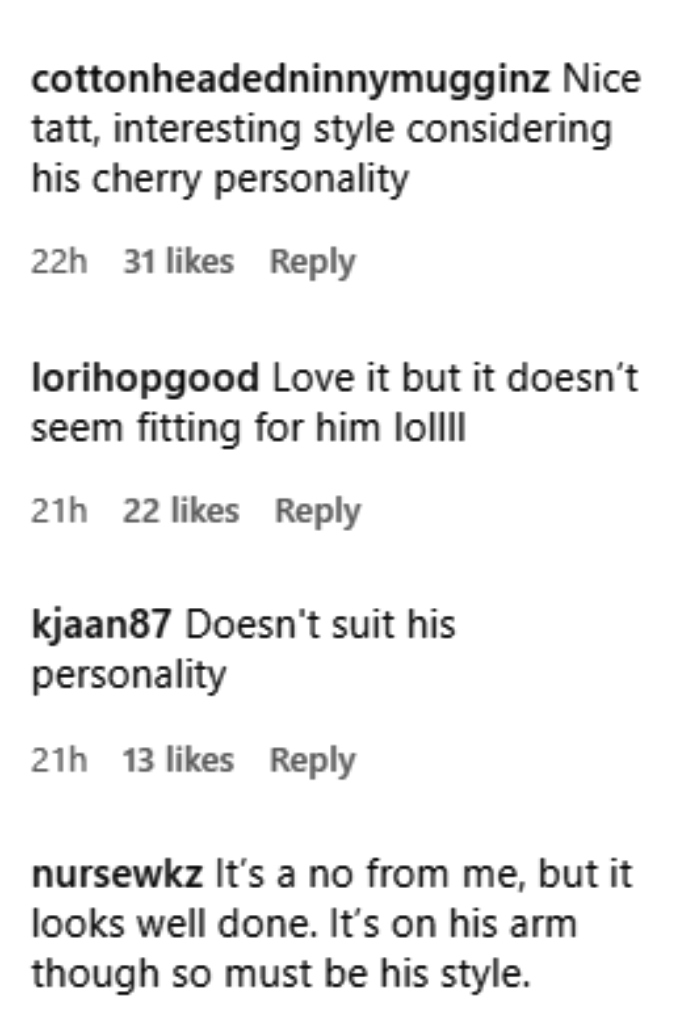 Teen Mom 2 alum Cole DeBoer showed off his latest tattoo, but fans of the show weren’t feeling his “ill-suited” ink.

The 33-year-old father of three showed off his latest arm piece in his Instagram Stories on August 19.

Chelsea Houska’s husband flaunted his new ink, covering the triceps region on the back of his arm, extending from the shoulder to his elbow.

The tattoo, done in black and white, was a menacing skeleton wearing a cowboy hat with a feather in it. It held a revolver shotgun in its hand, aimed at the viewer.

Teen Mom Chatter on Instagram shared a screenshot of Cole’s tattoo from his Instagram Stories and other Teen Mom 2 fans discussed his choice of ink.

“What does everyone think of #coledeboer new ink?” the post asked.

“Love it but it doesn’t seem fitting for him lollll,” wrote another critic of Cole’s tattoo.

One commenter noted that because of the tattoo’s placement on Cole’s arm, it must be a style that he really likes, to get it on such a visible area of his body.

“It’s a no from me, but it looks well done. It’s on his arm though so must be his style,” the commenter noted.

As previously reported by Monsters & Critics, Cole caused a frenzy with Teen Mom 2 fans when he was caught sporting a “DILF” shirt in his wife Chelsea’s Instagram Stories.

Cole and Chelsea’s fans were able to get a good look at Cole’s ink when Chelsea shared a shirtless pic of Cole earlier this summer. Cole showed off his chiseled arms and abs, along with his tattoos in the pic.

Since announcing their departure from Teen Mom 2, Chelsea and Cole have stayed busy not only raising four kids, but running their business ventures. Chelsea shares daughter Aubree with her ex, Adam Lind, and she and Cole share son Watson and daughters Layne and Walker.

One of Cole and Chelsea’s business ventures is selling high-end diaper bags and backpacks, which many Teen Mom 2 fans slammed for being way too pricey.

Will Teen Mom 2 fans get to see more of Cole’s tattoos and chiseled abs? Although they’ve stepped away from Teen Mom 2, Cole and his wife are open to the idea of filming their own show, if it meant they had more control over what would be filmed.

Chelsea said of her and Cole doing their own show, “We would never do anything that discussed, like, our kids’ personal lives ever again. But, I think we’d be open to do something else, if the opportunity presented itself.”