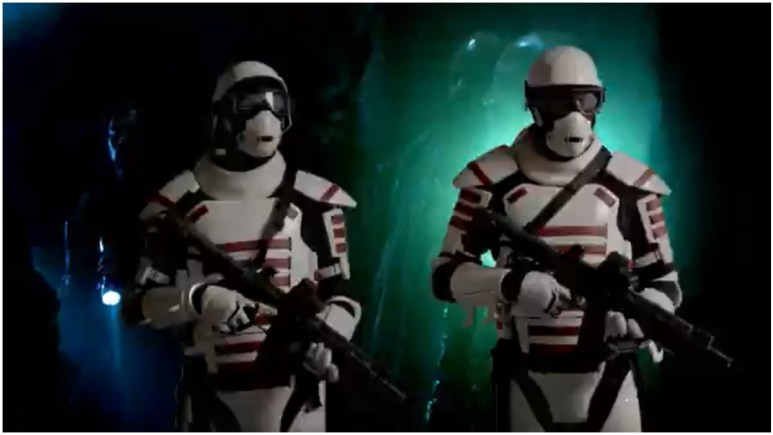 Ever since Fear the Walking Dead premiered on AMC, the talk of crossovers between it and the original series, The Walking Dead, has always seemed to be at the forefront. Now, as the final season of The Walking Dead gets set to premiere, a new crossover theory has been developed.

In addition to this, there has been the hint that maybe Daniel Salazar (Ruben Blades) may have known Abraham (Michael Cudlitz), and Althea also interviewing him, along with Eugene (Josh McDermitt). Along with these, there has also been the inclusion of the Civic Republic Military (CRM) group appear across the two shows and be the focal point in The Walking Dead: World Beyond.

Now, a new theory has been developed that sees Victor Strand (Colman Domingo) being involved with the Commonwealth.

Strand will create the Commonwealth

Talking on the Twitch live stream for The Walking Dead Universe, host Dylan Guerra explained his theory that sees Strand heading the Commonwealth.

“He might build the Commonwealth,” Guerra said before explaining further.

“We don’t know where the Commonwealth might be exactly. And one of my theories is that Strand — not necessarily that he’s still there by the time that our friends get there [the] mothership — but that he might be planting the roots for what will eventually become the Commonwealth.”

Currently, the Commonwealth is a group that is fairly new to the original series, having just been introduced in Season 10 of The Walking Dead.

Eugene had taken a small group to meet up with a character called Stephanie that he spoke to over the radio, but they were taken captive by Commonwealth guards instead. So, already, this group is considered to be antagonistic.

In the final episodes of Season 6 of Fear the Walking Dead, Strand was already acting like he had jumped ship and joined the dark side as he not only threw Morgan to a bunch of walkers, but he spoke of his inner — and decidedly darker — personality traits to the newly introduced character called Howard (Omid Abtahi).

So, already, the seeds could be set for this theory.

This is particularly true considering Fear the Walking Dead is currently lagging behind the timeline that features in The Walking Dead, giving Strand plenty of time to come up with the concept for the Commonwealth.

Does this theory work?

For fans of the comic book series on which AMC’s shows are based, it seems unlikely that this theory pans out at all.

Pamela Milton heads the Commonwealth in the comics. This character has also been recently announced as appearing in Season 11 of The Walking Dead, making it look like this theory has crashed and burned already.

However, as Guerra points out, Strand may be the one who plants the idea of the Commonwealth that might be tended to by Pamela, who now heads the large group. Plus, given the time lag between the shows, it would also give Strand and Pamela time to meet up.

In addition to this, AMC is partial to changing things up to keep things interesting for fans, and this would certainly shake things up considerably.

However, viewers will likely have to tune into The Walking Dead when it drops later this month to find out if this new theory is true or not.