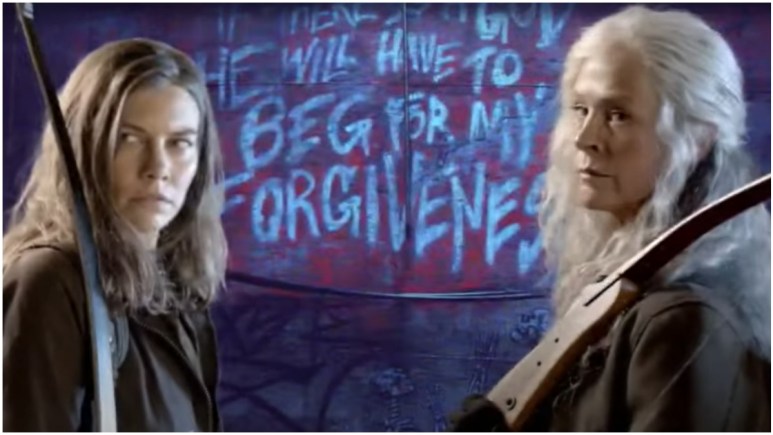 All good things must come to an end, and AMC’s hit zombie apocalypse series, The Walking Dead, is no exception. The eleventh — and final — season is set to drop later this month on August 22 and will be a massive 24-episode extravaganza.

According to The Walking Dead’s long-time executive producer, Denise Huth, fans can expect the show to “go out with a bang.”

Of course, as yet, she hasn’t explained whether that will be figuratively or literally. And, let’s face it, with The Walking Dead, it could go either way.

Although, as recently as last month, the series showrunner Angela Kang revealed that the writers hadn’t even finished writing all the episodes yet.

Fans should expect an epic finale of The Walking Dead

Speaking during a Twitch live stream with TWDUniverse, Huth had plenty to say about the final season of The Walking Dead, according to Comic Book.

“We’ll go out with a bang,” Huth stated before adding, “Nothing lasts forever.”

It came as somewhat of a shock to many fans when the announcement that Season 11 of The Walking Dead would be the show’s last. Ratings had been dropping over prior seasons in the lead-up to the announcement, but the TV show was still a mega-hit for AMC.

However, it appears that the network is planning to make sure the final installment will satisfy viewers, especially with the announcement that the season’s episode count would be bumped up to 24 episodes from the usual 16 per season. This will be spread out into three parts, the first of which will drop this month and the remaining two scheduled to premiere in 2022.

Huth was also quick to give credit where credit was due: the fanbase.

“It’s a cool story, and I’m so proud, and I’m so grateful that we’ve been able to tell it as fully as we’ve been allowed to do, and that’s one hundred percent a credit to the fans,” she added during the live stream.

“11 years later, 11 seasons later, to be here is an honor. This is a pretty rare era for television. It’ll probably never happen again in the world of streaming, which wasn’t much of a thing when we started. I’m proud. I just want to get through it and do the series proud and do these characters proud. You can never satisfy everyone, but I hope for the most part the audience is happy with the conclusion.

As for what fans can expect to see in the final season of The Walking Dead, those who read the comic books on which the TV show is based have a general idea.

The Commonwealth community will definitely be explored in Season 11. However, the show has veered off track and created its own version of this storyline to help accommodate some of the character developments, such as the loss of Michonne (Danai Gurira) and Rick Grimes (Andrew Lincoln).

Presently, Michonne is searching for Rick, and it seems likely that her comic book storyline will be taken up by Yumiko (Eleanor Matsuura).

Additionally, a new antagonistic group called the Reapers was introduced late in Season 10 of The Walking Dead after Maggie Rhee (Lauren Cohan) returned from a long absence.

In addition, Norman Reedus, who plays Daryl Dixon, recently said that the first part of Season 11 would focus more on Maggie’s story before taking a dramatic twist. Potentially, this could lead to the dramatic climax that Huth referred to, but until the season concludes, it seems likely that fans will have to tune in to find out for sure.