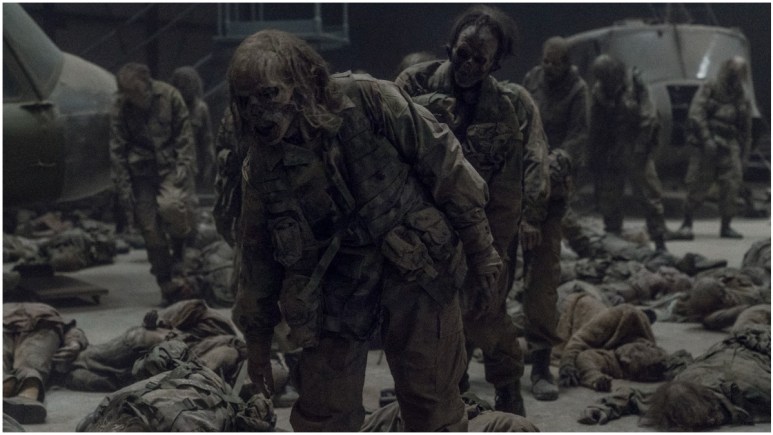 Season 11 of AMC’s The Walking Dead premiered on Sunday night after much anticipation and a whopper 11 weeks of reveals line-up that got fans desperate to know more.

Episode 1, titled Acheron: Part 1, takes a closer look at Maggie Rhee’s (Lauren Cohan) return and her conflict with Negan (Jeffrey Dean Morgan) as a small group goes searching for supplies. In addition to this, viewers got their first real tantalizing look at the Commonwealth.

Episode 1 opens with a supply run on The Walking Dead

With Alexandria in bad shape after the Whisperers War that occurred in Season 10 of The Walking Dead, the hunt is on to search for as much food as possible now their crops are ruined.

This sees Episode 1 opening with a small group entering some sort of army bunker. The ground is laden with the dead and it is made abundantly clear at the start that these walkers are snoozing to pass the time since one is alerted to the sound of humans on the roof above.

However, for whatever reason (I suspect “because plot”) the walker just goes back to sleep so that Maggie and the others can enter quietly and. Just. Walk. Among. The. Walkers.

I’d be okay with this if the canon didn’t so completely see walkers as scent-driven when it comes to humans in the vicinity.

So, they all grab a bunch of MREs and they are being lifted out on pulleys by those that remain on the roof.

That is, until a rope snaps. Daryl (Norman Reedus) manages to catch the end of the line before it plummets to the ground but he injures himself in the process. His blood drips to the ground and this is when the walkers finally wake up properly.

It all goes to s**t pretty quickly after that.

However, they manage to overcome the majority of walkers and get lifted out of there — Carol Peletier (Melissa McBride) even managing to hoist up some extra MREs and reclaim Daryl’s throwing knives in the process.

Alexandria is a mess

While the MREs are an excellent find in a landscape that has been picked over completely, it is still only enough to feed everyone for another week.

A meeting is held and things look grim until Maggie opens up about the place that she came from. Meridian has plenty of supplies — the only catch is that the Reapers struck there and that’s why they had to leave.

Still, it’s a risk they’re willing to take at this point in the game.

A storm hits — both literally and figuratively

Maggie heads the group, naturally, and Negan goes along as well as he seems to be the only one with knowledge of the area.

A storm hits and the group decides to hide out in the subway. Negan isn’t too excited about this venture since he can see a water line in the tunnel.

He points this out to the others but everyone is too busy hating on Negan that they totally forget that they are all survivors who should know the inherent dangers of a storm overhead and a water line in a tunnel below ground.

So, forward, they head.

There are lots of walkers wrapped in plastic and, when Daryl opens a bag, it is discovered that they were likely killed before the zombie apocalypse hit. Negan suggests that this could still be a current killing ground and they should leave but because he says it, they all vote to continue forward.

Until they come to some upright walkers. Like an actual horde of them.

It’s an inopportune time, too, since a train carriage is blocking their path.

They all scramble to the roof. Negan is the second to last to go and Maggie comes up the rear. Everyone has managed to scramble just fine up to this point but Maggie fumbles. Negan looks over, sees that she might fall into the horde of walkers, and just casually disappears as Maggie falls to the ground.

Now, I have no idea what happens in the next episode yet but I get the distinct feeling that Maggie gets her turn at the sh*tty dumpster fake death like her husband Glenn (Steven Yeun) got back in Season 6 of The Walking Dead.

Honestly, though, I am betting that Negan will redeem himself somehow, most likely through the door at the back of the carriage that they couldn’t get open earlier. because, seriously, Maggie has only just returned and there is no way that AMC is going to kill her off just yet when there is plenty more Maggie/Negan angst.

Eugene’s group gets interrogated by the Commonwealth

Episode 1 of The Walking Dead Season 11 also takes a closer look at what happened to Eugene’s (Josh McDermitt) group. Previously, they set out to find Stephanie, of whom Eugene had been speaking via radio.

What actually ended up happening was they met Juanita “Princess” Sanchez (Paola Lázaro) along the way and then were captured by Commonwealth guards who resemble stormtroopers so closely that I can’t even take them seriously.

The group is now being interrogated by a couple of people in suits. Seriously, if I had lived through the zombie apocalypse and the world had been reset, there is no way I would be opting to wear a suit again like these two schmucks.

But, these two obviously seem to be into it and spend hours asking the group a variety of questions that range from what they did for a living before the outbreak right up to how many bowel movements they each have a day.

They also ask about Ezekiel’s (Khary Payton) growth on his neck and he not only lies about it being benign but he states that his family has no history of cancer.

While they are all interviewed individually, they get put in a holding cell together once the interrogation is over. It’s here that Yumiko (Eleanor Matsuura) starts working on how to get out of there.

As to be expected, Eugene has more faith in the system and wants to stay.

Princess is the best asset they have

When they ask Princess, they get no response. It turns out she has been spacing out entirely and focusing on every little thing the guards have been doing.

It turns out that Princess is incredibly good at listening to conversations and learning everything that needs to be known about the guards and their routines. She hadn’t been doing it to work out an escape plan but merely for fun.

She gets with the program pretty quickly, though, once it is all pointed out to her.

So, they pull a classic Star Wars move that involves taking out two of the Commonwealth stormtroopers and dressing in their armor, thus doubling down on the feeling that all these guards are idiots. Eugene and Yumiko are tasked with this role and they lead Princess and Ezekiel out for “reprocessing.”

They would totally get away with it too if they didn’t find the Commonwealth’s Wall of the Lost. It is here that The Walking Dead confirms that theory about Yumiko as Princess finds a photo of Yumiko and a message for Miko (Yumiko’s nickname) from her brother, Tomi.

“HAVE YOU SEEN MY SISTER MIKO CONTACT TOMI AT H,” the message read.

It is at this point that Yumiko decides she has to stay. Whether she will be reunited with her sibling remains to be seen, though, and viewers will have to tune into Episode 2 to find out more.

Season 11 of The Walking Dead is currently airing every Sunday night at 9/8c on AMC.