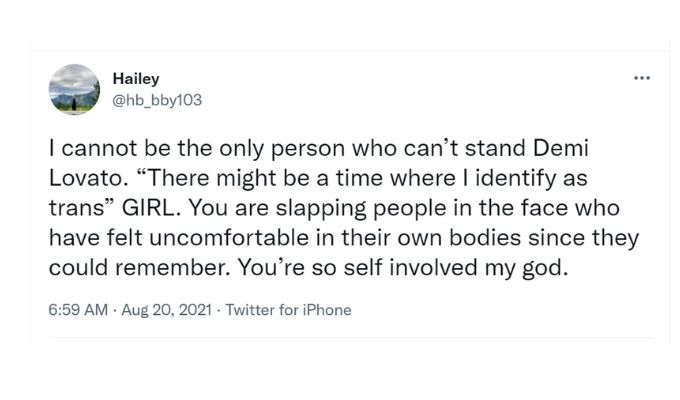 Lovato has been a well-known performer since 2008, making their big break on Disney’s Camp Rock. Prior to that, they starred in Barney & Friends and made a brief cameo in the crime drama Prison Break. Since then, they have overcome the toxic Hollywood terrain and have taken bold stances, speaking candidly about their experience with drug abuse, eating disorders, and gender dysmorphia.

In May 2019, Lovato came out as nonbinary and shared that their pronouns are they/them.

In an Instagram video, they expressed, “Every day we wake up, we are given another opportunity and chance to be who we want and wish to be. I’ve spent the majority of my life growing in front of all of you… you’ve seen the good, the bad, and everything in between,”

They continued, “Today is a day I’m so happy to share more of my life with you all – I am proud to let you know that I identify as non-binary and will officially be changing my pronouns to they/them moving forward. This has come after a lot of healing and self-reflective work. I’m still learning and coming into myself, and I don’t claim to be an expert or a spokesperson.”

While Lovato instantly gained the support of the LGBT+ community and allies, their latest comments have left a sour taste in a few people’s mouths.

Speaking to JustJared, Lovato got candid about their gender journey.

Lovato added, “Or maybe there’s a period of time when I get older that I identify as a woman, I don’t know what that looks like, but for me, in this moment right now, this is how I identify. And I have a feeling that it’s not going to ever go back to one way or the other, but I just, it’s about keeping it open and free and just I’m a very fluid person, and so that goes with how I express myself as well.”

These comments confused many people who felt as though the singer was speaking about “identifying as trans,” as if it was a choice. Many have passionately taken to social media to express their thoughts and sentiments on the subject, accusing Lovato of undermining the transgender experience and speaking of it as if it’s a passing fad.

What are people saying?

The 27-year-old transgender model expressed, “I’m a transwoman, myself. Can we just break it down for a sec.”

They continued, “To me, as a transwoman, I just find this sort of thing incredibly offensive where people feel as though they can just identify as trans.”

Quinlivan said, “Being trans is not an identity, it’s a physical and mental misalignment from your psyche and your body. It gives you crippling anxiety, it makes you hate yourself, from the time you have consciousness. This isn’t something that you have an epiphany about when you’re, like 22 or, in her [Lovato identifies as they/them] case, whatever age she is. It just drives me crazy because Demi Lovato is an authority on trans issues now in the mainstream media.”

She goes on to share how this sort of misrepresentation can have “severe consequences” on transgender policies.

One fan shared the rant, adding, “Please listen: I’ve been trying to state something similar to this for so long but haven’t been able to do so because I lack the lived experience of being trans but she explains it perfectly.”

Another critic wrote, “I cannot be the only person who can’t stand Demi Lovato. ‘There might be a time where I identify as trans’ GIRL. You are slapping people in the face who have felt uncomfortable in their own bodies since they could remember. You’re so self-involved my god.”

“Usually I don’t question anyone’s ‘identity’… but what is up with Demi Lovato? They’re giving Trisha Paytas vibes. How do you say ‘there might be a day where I identify as trans’? Either you are… or you aren’t. That’s not really an identity you can choose,” wrote a third.

At the time of reporting, Lovato has not offered any clarification on their comments. While many fans are giving them the benefit of the doubt, others feel as though they are owed an apology or an explanation for the casual comments that were made misrepresenting the transgender community.