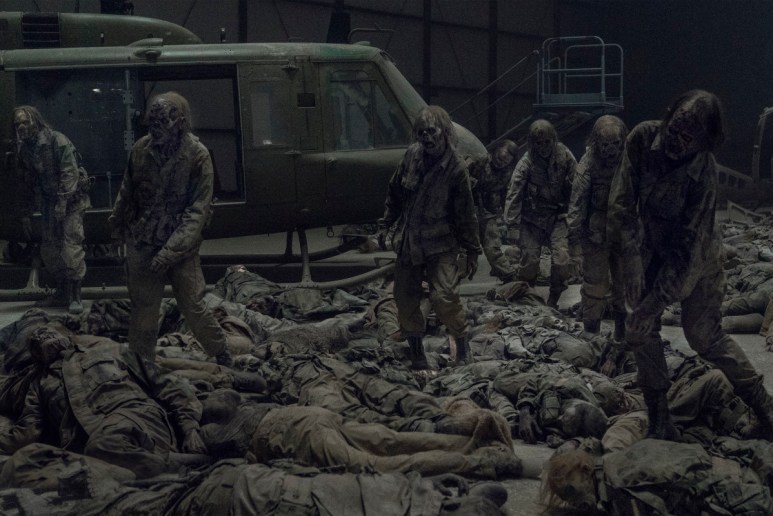 The final installment of AMC’s 11 weeks of reveals for The Walking Dead is finally here! Viewers can now check out the opening minutes of the Season 11 premiere below.

For those who have an AMC Plus subscription, the following trailer will be old news by now since AMC Plus played Episode 1 a week early. However, for the rest of us, here’s what goes down as The Walking Dead’s final season opens.

“In the season 11 premiere episode, Acheron: Part I, the group returns to Alexandria from a critical food mission but realizes it isn’t enough, so Maggie proposes a new plan. Meanwhile, those captured by the strange soldiers are relocated to another undisclosed location.”

The new clip for Episode 1 shows Maggie Rhee (Lauren Cohan) and others obviously on a supplies mission to help Alexandria out after the conflicts that occurred during the Whisperer War of Season 10.

Everything seems to be going smoothly as they pull supplies out of the location using a pulley system that draws bags up through the roof from down below. However, things quickly get deadly after the rope snaps.

Daryl Dixon (Norman Reedus) manages to grab the bag before it plummets back to the ground but not before injuring himself.

A few drops of blood trickle down his arm and drop to the floor far below. Landing on a walker, it quickly becomes apparent why the group has been silent during the entire process: those walkers are currently dormant.

The blood quickly alerts the walker to the presence of humans (although it’s unclear how none of them smelled them before this other than for dramatic storytelling purposes), and chaos quickly ensues.

There is plenty of carnage as the group tries to kill as many walkers as possible and be lifted out of the location by those above.

Carol Peletier (Melissa McBride) is almost ready to go but suddenly sees something and opts to rush off rather than be pulled out and away from the walkers. However, the clip ends here, and viewers will have to tune in on Sunday night to discover what happens to her.

While Season 11 of The Walking Dead will be the final installment in the hit zombie apocalypse series, AMC has extended the episode run to make sure the story gets concluded properly.

As with what occurred with Season 10, Season 11 will run for 24 episodes and will be broken up into three distinct parts. The first eight episodes will drop this year, but fans will have to wait until 2022 for the final two parts.