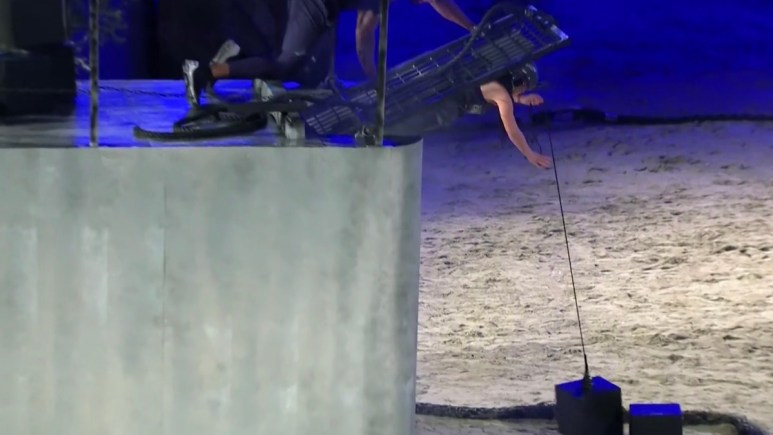 The Challenge Season 37, Episode 2 brought the agents another exciting daily mission, a sneaky deliberation move, and of course, another big elimination.

As the agents got back to headquarters, The Circle’s Ed Eason got some screen time, revealing he came from an Ivy League engineering background. He told Nelson Thomas and Gabo Szabo he was there to do some damage.

Everyone got to know each other more as the cast members had a party following the recent elimination. At the outdoor club, castmates showed off their unique dance moves, and some flirted. Michele Fitzgerald gushed over Emanuel Neagu since he is so mysterious.

After partying, Tori Deal got in bed to cuddle with her former teammate Kelz Dyke. Nelson was dancing close and then hanging out with Berna Canbeldek on the couch. Later, he snuck back to bed with Ashley Mitchell.

During confessionals, Nelson said he couldn’t see them together, but Ashley thought she might like him. Amanda Garcia said in confessional this could be a problem for Nelson.

The next day, Michele apologized to Tracy Candela for taking her partner, Devin Walker, after elimination. They hugged and seemed OK.

The veterans, including Josh Martinez, Nany Gonzalez, Fessy Shafaat, Ashley, and Amanda, talked strategy. They identified Kelz as a rookie target to get rid of.

Fessy and his teammate Esther Agunbiade had a chat about the upcoming challenge. He told her if they communicate effectively, they have a good shot at winning. He mentioned that he’s fasting due to Ramadan, as she went to eat breakfast.

Heli Heist involved agents riding in cars and helicopters. The daily challenge had two teams competing at once. It required one of the teammates to be standing up out the sunroof of a Range Rover. The other teammate was seated near the side of a low-flying helicopter.

The teammate in the helicopter tossed bags of gems down to their partner, who had to catch them in the Range Rover. Once the vehicles reached a finish point, the agents got out of the car and sprinted for the finish line.

The team that recovered the most gems the fastest would become The Agency with the other teams on the chopping block.

Devin said during a confessional that Emanuel was one of the sneakiest and strongest players there so far. Emy Alupei admitted during the challenge that she has a fear of heights, but she planned to conquer her phobia. Ed figured maybe it would’ve been better if he’d been in the helicopter.

Emy was bawling her eyes out after the daily challenge, thinking she was the weakest one there. A lot of castmates comforted her during her emotional state.

TJ Lavin revealed that Josh’s partner, Lauren Coogan, was deactivated ahead of the final run. Just like Nam Vo leaving The Challenge, TJ didn’t give a reason for Lauren leaving. They brought in Josh’s replacement, Double Agents winner Amber Borzotra.

After all teams completed the mission, TJ revealed the best teams. Kaycee and Emanuel got 28 bags, but Fessy and Esther had 30 bags to become The Agency.

Josh spoke with his new partner Amber about moving forward to be part of the veteran alliance. Emy was worried she might get sent into elimination with Ed since he’s the new rookie.

The cast had their party time with Amanda and Fessy flirting some more. Ashley told Nelson she was catching feelings, and that causes her to run from him sometimes. Nelson was surprised to hear that.

Fessy talked to Kelz, suggesting he might go after him as a target for elimination. Kelz said he didn’t want to make a deal with him when Fessy was in a position of power because there’d never be any trust between them. Later, Josh told Fessy and others they needed to get vets to vote in Kelz.

Ashley caught Nelson talking with Berna at the club, and it upset her. Later, she talked trash to Berna and started referring to her as “Bertha.” CT got worried that Ashley might try to throw his partner Berna into elimination. Nelson told Berna not to worry over it.

At deliberation, Josh called out Kelz for going around making promises with vets and rookies. Kelz said that was a fake lie and told Josh just to say he’s shook by him. Devin spoke up and asked if it’s not Kelz, then who’s the other option?

Esther spoke up as part of The Agency. She told everyone to vote for the person they don’t want to see at the final. Everyone locked in their secret votes. Tracy and Kelz were the Compromised Agents.

Following deliberation, Kelz spoke to Priscilla Anyabu and Tacha Akide. He said he hoped it would be a physical elimination, and he was “taking everyone’s head off.”

Josh spoke to Fessy about who else to send in. Fessy brought up Amber, and Josh said no way. They also talked about Berna.

Who went home in the latest elimination?

At The Lair, it was time for the second elimination. TJ Lavin called down the Compromised Agents, Kelz and Tracy.

Next, Fessy and Esther had to send in one man and one woman to face them in elimination. They sent in Emy without prior notice, and she realized they were “snakes” she couldn’t trust anymore.

Their pick for the man to go into elimination was Emy’s new partner, Ed Eason. Emy broke down in tears about feeling betrayed as she told Mr. TJ about it.

They competed in Flipping Agents. One agent was strapped to a metal bed in a contraption. The other teammates used their strength to flip them over to retrieve puzzle pieces using a rope with a magnet attached to the end.

They had to get all 12 puzzles pieces and solve a puzzle, which was a world map. The first team to solve the puzzle stayed in the game. The losing team was deactivated and sent home.

Emy and Ed moved quickly in the elimination event, while Tracy fumbled and dropped a few puzzle pieces early. Kelz was getting upset, but they eventually caught up to Ed and Emy.

Emy and Ed got to the puzzle first, but Kelz and Tracy were right behind. However, they weren’t quick enough, as ultimately, Emy and Ed solved their puzzle first to win.

Kelz and Tracy were officially deactivated from the season. After their win, Ed and Emy decided it was smart to steal new partners to get farther in the game.

Ed went with Tori Deal, and Emy chose Devin Walker once again. That made Michele and Corey Lay partners by default, with Corey realizing they’d be a serious threat from now on.